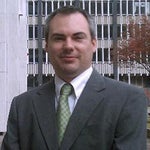 I was born and raised in Memphis, Tennessee. During college, I studied at East Tennessee State University, where I received a Bachelor's in Criminal Justice, which I then followed up with a Master's in Criminology from the University of Memphis. Before beginning my legal career, I worked as a Project Coordinator at the University of Memphis, where I assisted in training law enforcement officers in the Memphis Model of Crisis Intervention Training. The purpose of the project was to provide officers with the tools to deal with citizens in a state of mental crisis. I then went on to study law at the Mississippi College School of Law in Jackson. During law school, I clerked with Victor W. Carmody, Jr., the lawyer who wrote the book on DUI law in Mississippi. I am currently licensed to practice law in both Tennessee and Mississippi, and spend a majority of my time traveling the highways and biways of Mississippi defending those who have been charged with a DUI.

Thank you for contacting us. We will get back to you shortly.

Please complete all required fields below.

Please contact me anytime to discuss your case. I understand that you will have many questions about your DUI, and I will guide you through answers to the questions that you have and those that you haven't thought of. My goal is to make you comfortable with the defense process. Every case is prepared for trial, but a trial is not always necessary. Consultations are always free and confidential.

Someone on your side

Being charged with a crime is intimidating. Beyond the fear of jail, court costs, and fines, there are questions as to the impact on your job and your right to drive. Rest assured that I will be there every step of the way to guide you through the process, and to help you minimize the impact of a DUI on your life. Call me today.